Quality is his favorite color

Martin Neureiter is the sixth generation to run the painting business, which was founded in 1838. He is a four-time Upper Austrian Craftsman Award winner. His ability to use colors goes far beyond painting facades and interiors.

Anyone who uses the word “modern” today means white or one-colored walls. That too has to be done, but the Neureiter master craftsman also knows how to deal with decorative art. Restoration, stucco, gilding and historical painting techniques are also part of his repertoire. His specialty is painted pseudo-architecture, the “art of seeing and deceiving”. As unusual as this technology may seem in today's world, eye illusions through art have always fascinated and delighted people.

Art comes from ability and once referred to any useful skill. There were no useless skills. By the way, in earlier times pictures by painters were not considered art in the modern sense, but rather as pieces of furniture. They were simply part of the furniture - as far as one could afford it. A painter in today's “artistic” sense used to be nothing more than a craftsman who met people's need for color design, for beauty and expression.

The (salt) Kammergut (located as a historical term between Ebensee and Dachstein) managed with a single "Mahler" until the 19th century. Salt production shaped the economic management of the region and its destitute working class milieu. Houses were economic functional buildings in stone construction (the places are described by the first travelers as "barren and stony") and not designed according to aesthetic or representative criteria. The interiors were paneled with wood or - more often - "whitewashed" or whitewashed.

Lime has many advantages. There is enough limestone, it is burned in the "lime kiln" until it disintegrates, extinguished with water and then stored in a lime pit. Lime is both a binder and a color pigment and can therefore be used without any further additives. It promotes the exchange of moisture (especially advantageous with old building structures!) And has a disinfecting effect, which was particularly important in earlier times. Lime paint was used to disinfect the stable, kitchen and other rooms. In the private sector, however, this was done in-house. Almost every house had the appropriate know-how and the required lime pit. 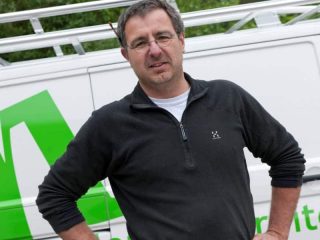