From loden to shoe

Sonja Grill opened a shoe shop in Bad Aussee in 1988 and passed the master craftsman examination for shoemaking in 1993. Handmade loden shoes, brogue shoes and bespoke shoes are made in the shoemaker's workshop in Pichl-Kainisch, founded in 1961 by father Josef Zaisenberger.

From a factual point of view, the human foot has always been used to natural materials when it comes to protective clothing. Their use has a correspondingly positive effect on the health and well-being of the foot. Loden warms, is breathable and at the same time, especially as whale loden, is almost windproof and waterproof. Nature or the Ovis gmelini aries (sheep) provide a great raw material that has been used for many centuries in the cold regions of Europe and is also very visually appealing.

As a traditional, resource-saving natural material, the Loden Sonja Grill inspired a model with a regional reference, the “Ausseer Tatscher”. This loden shoe with leather trim, optionally with lambskin lining, in different colors, is the perfect companion on cold winter days.

The use of loden has been proven since the Iron Age. The term goes back, among other things, to the Old High German “lodo” for “coarse cloth, coarse woolen stuff” and, by the way, denotes, contrary to the colloquial usage, both raw fabric before fulling as well as milled and roughened wool. (see Brockhaus and Ingrid Loschek, Reclams Mode and Costume Lexicon, Stuttgart 2011)

Loden was traditionally the robust clothing material of the European peasant and rural population. In the milled form, it was valued for its wind and rain tightness and was also used on a small scale for simple footwear. Evidence from past centuries shows that in Ausseerland loden was also used as part of working day clothing for all kinds of footwear - whether for "outdoor" walk boots with double leather soles or for "indoor" slippers.

In comparison, a pair of good leather shoes in the Salzkammergut was considered an expensive commodity until the 20th century, which was reserved for those who needed sturdy work shoes (forest and woodwork) and the wealthy. After all, a pair of shoes cost an average monthly wage and therefore you could only get them when your feet were "fully grown". 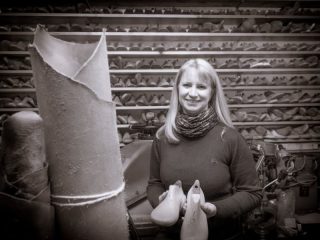