TRADITION - THAT WEAR ON THE BODY

Since March 2012, René Haselnus has been the third generation to run the bespoke tailoring shop in Altaussee, which his grandfather founded in 1932. He will continue to be accompanied and supported by his father Georg. Closely linked to the tradition of the family business and the traditional costume, the “G'wand” lives on under his hands in a handcrafted manner.

A good bespoke tailor is characterized by perfection, perseverance, patience and the famous instinct that makes the craftsman a master. The real treasure trove of quality, however, lies in traditional manufacturing techniques and in the experience of generations. For example, every measure is still made with horsehair inlay so that the garment remains breathable and dimensionally stable.

In our current understanding of traditional costumes, we like to follow the terms “traditional, regionally specific and traditional”. At one time, however, until the 19th century, the term traditional costume was synonymous with clothing and referred to everything “worn on the body”.

The “costumes” of this world inevitably resulted from the landscape (climatic environment, naturally available materials), the functionality that they had to fulfill (representation or work), and ... the general development of the history of costumes (fashion). It was not until the 19th and 20th centuries that the costume acquired its significance as an expression of regional affiliation and its regional “uniqueness” as a consequence of the formation of nation statehood.

In the Salzkammergut, traditional costume owes its special nimbus, among other things, to the aristocratic summer freshness of the 19th century. At that time the public had turned into a travel audience and had first learned to discover the “lust for the common people”. The simple clothes of the locals were viewed as picturesque accessories, as "decor" of the landscape and they wanted to wear them themselves - in the spirit of romanticism - but in a more socially acceptable design.

Traditional costumes and fashion for women and men 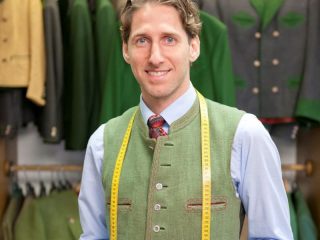 Hazelnus tailoring for women and men