Planks that mean the world

In 2015 Matthias Neuhuber stepped on the parquet floor with his grandfather's tools, his brother's chop saw and an old bus. Together with his brother and a local technician, he developed and built his own perfectly coordinated machine park.

He follows his conviction by specializing in marquetry and solid wood floors made from local woods. This also includes the restoration and adaptation of centuries-old plank floors. For after work he has developed the marquetry whiskey table with milled magnets for whiskey enjoyment at the highest level.

1) Clarification of the concept of planks

“Diele, a word used only in the common dialects in Upper Germany and Lower Saxony, to express a board cut from a tree of normal length; which is better known in the High German board. [...]

"The floors are usually covered either with boards or planks, [...] or with different types of wood, which is called a paneled floor, Fr. Parquet."

“The work is called planks when the carpenters cover a floor with boards or planks. […] By the way, the floor is either nailed directly to the beams, so where these are not horizontal they have to be lined; or a special camp must first be formed for this purpose, as is necessary in the rooms below on the earth. The space between the imaginary store or the beam is filled with clear, dry rubble that has run through the roll so that no board is hollow. And because a common board = length rarely defines the length of the floor, and often the circumstances do not allow special boards to be cut to the required length, which is why most boards have to be laid in batches: so it can be seen that at all times apply joint to joint with every joint. "

4) Recipe for paints to "grind parquet, or inlaid wooden floors". 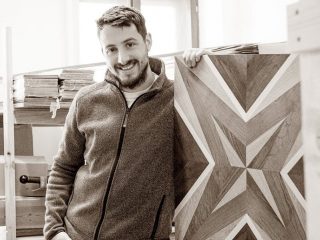