Hammer the taste into the beer

Mario Scheckenberger has turned his long-standing passion into a job. After 16 years as a hobby brewer, he founded the beer smithy in 2015, where his grandfather's blacksmithing was eponymous.

Developing your own recipes, carefully selecting from over 200 types of hops and malts that have hardened for different lengths of time around the world, doing every single step by hand from crushing the malt to bottling, these are the ingredients for the beers of the beer smiths full of character, their quality regularly through awards, up to the European Beer Star in gold, is confirmed.

In the production of the unique variety of beer, which can include up to 16 types, pasteurization and filtration are dispensed with, which means that all valuable vitamins, proteins and trace elements are retained. An important quality factor for wholesome beer is the maturation time, which is at least 6 weeks in the beer smithy.

Until well into the 19th century, it was common in the beer-drinking regions of Europe that larger towns or districts were supplied with this fermentation drink via “own” regional breweries. Only a few enclaves were able to maintain their independence in this regard into the 21st century. Fortunately, however, there has been a trend reversal for several years, a kind of decentralization. The beer smithy in Steinbach am Attersee is one of these “trend reversers”.

Production volume: 1000 hl / year
Beers: Up to sixteen, nine of them all year round; of the additional special brews, only one brew is brewed at a time, which guarantees a unique variety of beers

Such a variety of beers, explains company founder Mario Scheckenberger, requires a lot of passion and a constant focus on quality.

from 6 people by appointment 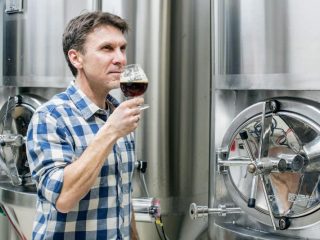