For centuries, not only rye flour, but also wheat flour, yeast, milk and fat, as well as other ingredients such as eggs or spices have been processed into white, fine and other specialty baked goods. Maislinger also likes to tie in with this baker's tradition with various breadcrumbs, holiday bread, hand-made baked goods, wakes, pretzels, etc.

Barbara Maislinger has expanded and expanded the bakery that her grandfather founded in Au in 1932 with great passion and commitment. With the three coffee houses, pastry shop, bakery, service and sales department, the family business has become one of the largest employers in the region under her leadership. Now the fourth generation is following in their footsteps.

Many businesses in the Salzkammergut have been family businesses for generations. For decades, in some cases for centuries, they have shown resistance to crises and a sense of responsibility for the region in which they are rooted.

The twins Alexander and Katharina Maislinger are the fourth generation who, at the age of 24 (2021), will follow in the footsteps of their great-grandfather in these difficult times. Both grew up in the bakery and when talking to them, the enthusiasm for the “legacy” and the craftsmanship cannot be overheard. The family business is a jewel, explains Alexander. After his apprenticeship and practical years abroad, he really realized how lucky it is to be able to build on something like this. In addition to the quality of life in his home town Goisern, the decision was not difficult for him.

However, this path was not predetermined from the start. The siblings walked it independently, out of conviction, Alexander, who realized at an early age that school and professional seats were not his and learned to be a baker. Katharina, who also noticed early on that she is more of the creative-manual type, paired with a social streak, and therefore, after completing her pastry apprenticeship, trained as a life and social counselor alongside her job. The three of them, with their mother Barbara, “shovel” the bakery on Sundays and public holidays when the employees are free. You get the feeling that each of the three knows where his strengths and weaknesses lie and that they can rely on each other. Somehow harmonious. 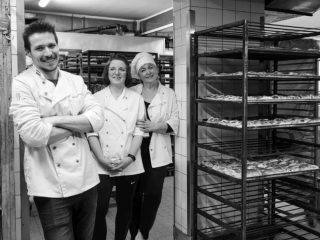