Hops and malt ... the craft keeps it!

In 2006 Lothar Mens and Hans Hölbling founded the Attersee brewery in Straß im Attergau with the aim of making beer a purely natural product again, consisting of hops, malt, yeast and barley / wheat.

Hops have not always been an indispensable part of beer everywhere. For the Attersee Brewery, hops are an absolutely incomparable ingredient that they obtain from the Mühlviertel. The other ingredients of their draft beers also come from Upper Austria.

Around 200 years ago, JG Krünitz praised beer brewing as "one of the most elegant and necessary occupations of the food industry." (JG Krünitz, Oeconomische Encyclopädie, Berlin, 1773 - 1858)

The peoples of the Orient and other parts of the world made the discovery thousands of years ago that the starch content of the seeds of all types of grain produces an intoxicating drink when treated with water and heat. Evidence from Mesopotamia, ancient Egypt and other cultures around the globe prove this. One can assume that beer was a coincidental by-product of the settling down of humans through agriculture, ie the cultivation of grain (emmer, einkorn, barley, oats ...). It is possible that excess grain was processed into beer-like beverages. Perhaps it was leftover bread that accidentally got into containers with water, warmed up by the sun and fermented by wild yeasts in the air, and helped people develop beer.

Interestingly, in Europe, brewing beer was a female domain for a long time, i.e. a woman's job in the context of housework. When urban centers with crowds of people and houses emerged in the Middle Ages, in which beer brewing soon grew beyond personal needs, it was linked to a brewing law, i.e. a kind of trade license. Maximilian I, for example, gave Hallstatt, or what is now known as the Bräugasthof there, one in the 16th century. 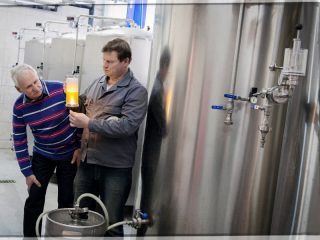