Roasting coffee on a wood fire - Barbara and Georg Hrovat are passionate about this art. The pharmacist is attracted by the processes, the diverse possibilities, the procedures, the small adjusting screws that lead to new, surprising results. The entrepreneur makes sure that the presentation fits the content. One of many details: the degradable packaging made from rice paper.

They let themselves be “infected” at the world's largest coffee fair in Vienna and since then have been fire and flame, seekers and finders at the same time. The right coffee beans, the right blends, the right contacts. This means, among other things, to be guided by the 10 principles of fair trade according to WFTO and to show that globalization can also be done differently. The coffee farmers in Brazil, Mexico and India get the money that allows them to maintain and improve their quality.

The coffee beans are not beans at all, but the seeds of the fruit that grows on the coffee bush. They are probably only called beans because the Arabic “bunn” sounds very similar for the fruit of the coffee bush. The Arabic “kahwe” for coffee was probably also the inspiration for the European name for this aromatic drink. And then there is mocha as a name for a coffee specialty that is derived from the Yemeni, formerly flourishing port city of Mokka (al-Muchā).

As early as the 10th century, Arab writers reported on the coffee fruit, but not at that time about its use as a drink. Around this time there is also the legend that it was "goats (or camels) [...] in a country of the Turkey (= Ottoman Empire) [...] that were so lively and funny after enjoying the ripe beans of the coffee plant, that they hopped around all night and were lively, contrary to their previous habit. ”This observation prompted an attempt“ to find out whether those monks who often slept through early mass could use it to diminish their sleep ”. Krünitz reports in his Economic Encyclopedia. We can assume that the monks never again missed early mass.

It is by no means intended to conjure up the usual clichés, such as, after the Turkish siege of Vienna (1689), the liberated besieged ignorance of the “Turkish” coffee left behind by the refugees or what the Viennese coffee house culture is all about. 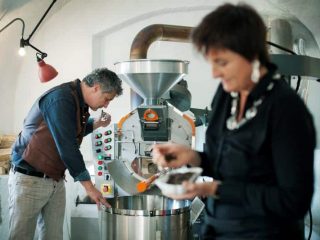