A musical instrument that is likely to hit

The body of all Schmidt harmonicas is made of specially cut spruce wood, which ensures a melodious, strong tone. This is then veneered with different types of wood, depending on the customer's requirements. In contrast to violins, however, it is not only the body wood that is decisive for a beautiful sound, but also the type and quality of the other components, such as B. the reeds, the reed blocks, the top or the body base.

Therefore, only selected materials with a long service life are used for the instruments.

Schmidt harmonicas are also characterized by their exceptional light weight and maximum stability.

More than almost any other instrument, the individual wishes and ideas of the musician can be taken into account when building a harmonica. This is the great strength of Franz Schmidt, who discusses all the components with his customers, whether amateur or professional.

Even “whimsical new” instruments appeared on the music scene in the 19th century, including hand-drawn instruments. The design of the Styrian harmonica was invented in Vienna and, due to its diatonic structure, was particularly suitable for “alpine folk music”. Since this music was simply called “Styrian” in Vienna, the new instrument also became “Styrian”.

The Styrian harmonica differs from other hand-pulled instruments in that it generates different tones when pulled and pushed (diatonic) and that the reeds inside the body are made to vibrate not by keys but by buttons. That is why it is also often called the button accordion, in various cases also Quetsche, Zugin, Styrian, accordion and, in the Salzkammergut, especially “Zug”. Its deep bass, the volume of sound and a certain liveliness make it a solo instrument that does not require any further instrumental support.

From school instruments to concert harmonica 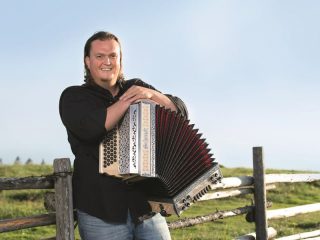