The hat as a garment and accessory

The hydraulic hat shapes hiss and steam, the sewing machines rattle, shelves full of pillars, ribbons, trimmings, hat accessories and a wide variety of hat shapes made of wood ... The Bittner hat production in Bad Ischl was founded in 1862. Franz I. Bittner had settled in Ischl - coming via South Tyrol - in the hope that the surroundings of the imperial summer resort would be conducive to the future of his craft. The 6th generation, hat maker and junior boss Katharina Bittner, is now designing its own collections.

Katharina Bittner completed her apprenticeship as a hat maker in 2018. With its own Kathi -Bittner collections and many ideas, the fresh wind of rejuvenation now joins the stability of the traditional company. In 2020, two ingenious floral hat collections were created under her leadership. The hand-embroidered hatbands are exceptional. This is an old, meanwhile little known embroidery technique that the bespoke tailor and designer Renata Samojedna has mastered perfectly. She embroidered the hatbands exclusively for the Bittner company. Whether in the shade-giving version of the summer hat made of braided straw or on the felt hat for the cooler season - "the woman has the hat" takes on a completely new meaning in this congenial design.

The hat decorates and protects at the same time. The traditional company Bittner-Hüte stands for first-class headgear adapted to the Austrian way of life for hunting, sport, leisure and traditional costumes. In the Salzkammergut, the hat is an indispensable part of the costume, it is also "held up" outside of traditional costume occasions. It is worn by men, women and children. The hat experienced the diversity of its current forms in the course of the 19th and 20th centuries. At the end of the 18th and beginning of the 19th century, the city visitors to the Salzkammergut appeared with the cylinder from England. At that time, the Salz-Kammergütler still wore the wide-brimmed, hemispherical plucked hat, which is reported that in rainy weather a pint of water could easily collect in the wide brim, which had to be poured off from time to time.

The "rural population" really liked the proud cylinder and began to have a lasting influence on the shape of the hat. In this way, in the course of the 19th century, among other things, the metamorphosis into the black, conical so-called Ausseer hat with a green ribbon and a narrower brim took place. 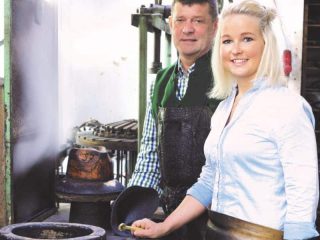